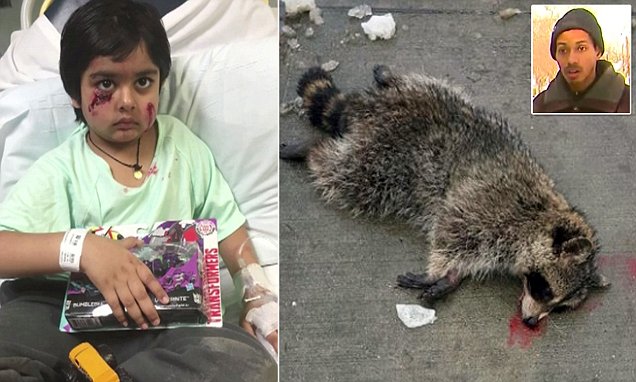 Aryan Gavali is a six-year-old boy from New Jersey walking down to school like any other day. Little did he realize that he is in for an attack by a wild animal. Little Aryan was attacked by a raccoon and was admitted to the hospital in New Jersey. He was later discharged from the hospital today. The attack had left the little boy in pain with nine stitches. His mother Monali Gavali said that she thought it was a monkey but later realized that it was a raccoon. The incident happened on Wednesday before 9 a.m. as he was walking to school. His mom was accompanying him while the incident occurred. The school is located in Elmwood Park.

The raccoon attacked Aryan on his face as it was the only exposed skin available as he was clad in a jacket as it was cold outside. Danny Walls, who witnessed the scene was quick enough to grab a pole nearby and killed the raccoon, not before it tore the skin of the little boy as he was screaming and bleeding on his face. The boy’s mom thanks Gavali for his brave action in saving her son. She added that if Gavali had not acted quickly, the boy would have been injured badly. The animal was sent for a rabies test, and the results will be out by Friday.

Meanwhile, the wildlife experts called to look out for raccoon rabies. The experts also alerted for raccoon out in the daytime as these are nocturnal animals. They also asked people to watch out for aggressive raccoons that are foaming and are disoriented.